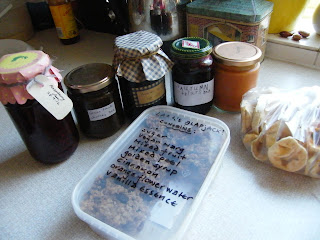 Food swaps are something I've seen mentioned in the blogs of American crafters before, but apart from the odd one in London, I'd not heard of any in the UK. So imagine my joy when a local allotment group I follow on Facebook announced one happening in the very city I live in!

A group called Apples for Eggs were putting on a food swap and I was determined to attend! I recruited my fellow baker/food enthusiast SGx and we set to working out what to make. It was a bit difficult doing research online for it. The majority of food swaps I could find mentioned were ones held in the US, and they seem to take their food swaps very seriously over there! A lot of the things being exchanged were of a quality you'd expect to be paying for, not at a food swap. I didn't think we were ready for that level yet. So, bumbling along through things as I normally find myself doing, I came up with this humble selection of goods: 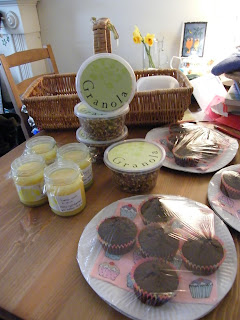 That's jars of lemon curd, plates of chocolate muffins and tubs of granola.


Once we arrived, we found a place to display our wares and filled in a form for each thing we'd brought with us. After set up there was about an hour for people to mingle about and bid on your items with theirs. (e.g. if I found something I wanted to take home I'd bid one jar of lemon curd or "anything from my table"). Then there was announcement saying it was time to swap.

Now I'm sure this bit works fine when you've got a group of outgoing individuals (not to cast asparagus, but I'm sure it works a it better in America), but I found this bit took a bit of getting used to, we were really only getting into the swing of it by the time everything was swapped. This part of the afternoon required you to be brave and go up to people with one of your items to offer in exchange for theirs. There was a lot of awkward interactions with people and missing out on things I had my eye on due to my being too slow and doddery. But I definitely learnt a lot from it. People were by far more interested in savoury things, the cake market was a bit saturated to say the least. Interesting preserves (someone had made some apple curd, and it was SO GOOD) and different taste combinations went down best. It was also a good idea to have lots of tasters for things, which I foolishly thought I could get away with not doing.

At the top of this post you can see the goodies I came home with. A fair few jams, some reallllllllly good flapjack, a jar of SGx's delicious passata (she was totally eyeing up my chocolate muffins all afternoon, so we swapped :D ) And some dried apple slices. Hmmm...

Overall the food swap was lots of fun, very interesting and enlightening. It's lovely to see what people outside your normal baking circles (i.e. Ma and SGx!) create, lots of new ideas. 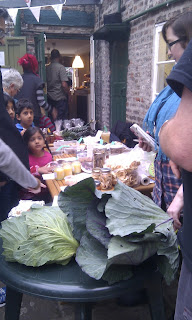 It was even covered by the local newspaper! Here's the video link. You can see me about a third of the way through, scratching my face and looking generally a bit shifty....


There's another food swap in the works for York due in early spring apparently, with things like seedlings and cuttings being swapped as well this time. I've already started with my game plan, I've got what I hope are some good ideas for things to swap. I just need to work on being more outgoing and I should have a winning food swap formula!

After the success (I hope anyway!) of making all my Christmas gifts to friends and family last year I thought it would be a good idea to repeat it again this year. Although this time with bigger projects. But the same amount of time.... Err... yes. Despite my best efforts, and having started planning and picking out projects as early as September, the actual making of the gifts didn't end up starting until mid-November. Oops! I did manage to get most of them done though, which was some sort of miracle.

So here's a selection of the gifts I made, unfortunately I forgot to take pictures of some of the things I made, but this will give you the gist I'm sure! 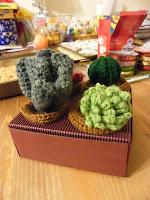 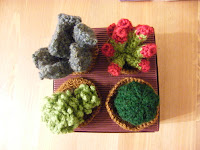 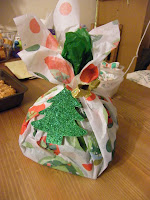 (And nicely wrapped up of course, that's part of the fun) 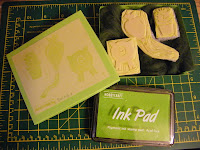 And a hand carved stamp set. 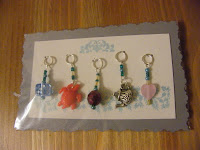 A pack of hand made stitch markers 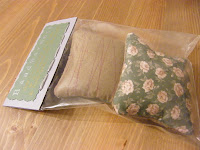 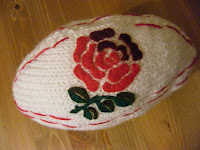 A knitted rugby ball, adorned with the England rugby team's rose logo (painstakingly cut out of felt then each piece individually hand sewn on, more fun that it sounds actually!) 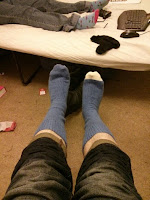 I made two pairs of socks for various people, although not without major frustration! One pair needed just a tiny bit more yarn than I had in the right colour (this was one of the late presents, so time was of the essence), so they ended up like this! And the other I tried to knit part of whilst in a pub (tut) and had to frog back this much (*sob*) But in the end they were ok! I used this pattern  for them. A nice straight forward heel turn, and an easy pair of socks to knit, as long as you're paying attention! 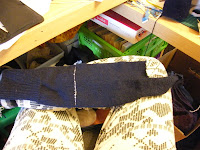 This little amigarumi Hello Kitty/Totoro was another late gift, although in my defense I had no idea it was so awkward to find safety eyes! (I found mine here in the end, good price and sent as quick as you'd expect for something coming from China to the UK) 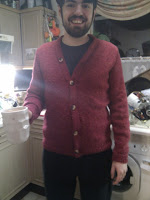 And finally le Boof's patience paid off and he got his cardigan I'd been promising since July. Not strictly a Christmas gift, but it was finished in my big crafty post-Christmas spell when I was trying to get everything promised to people done! It probably would have been finished though if this hadn't happened. I've not had much luck with flexible needles finer than 5mm :S

As well as hand crafted gifts I did a few small food hampers. These included: 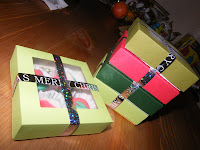 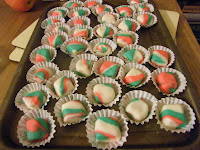 Butter tablet fudge, which came out nice and crunchy (yay for achieving my first proper hard-ball set on a sweet!) 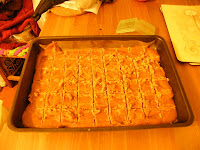 A gingerbread house, which I got the icing just right for this year. No mugs holding up my gingerbread walls while they set! 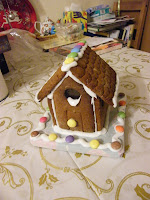 I've got lots more lovely Christmas things to share with you, but that'll be for another post methinks!

A blog about the various arts and crafts I dabble in, starting up my own sewing business and a little bit about living with Chron's disease
My business 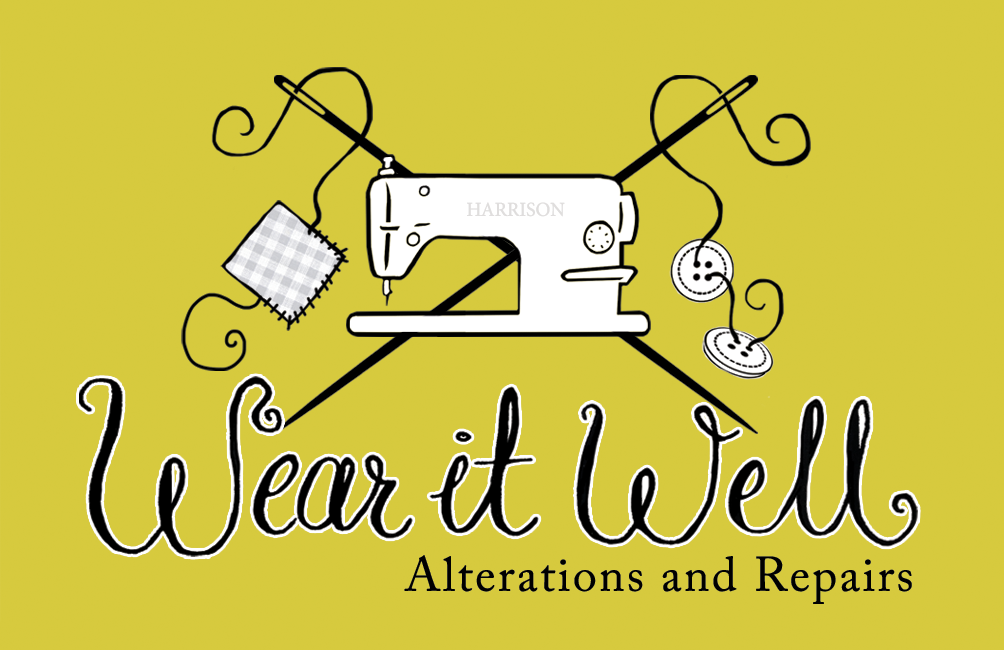 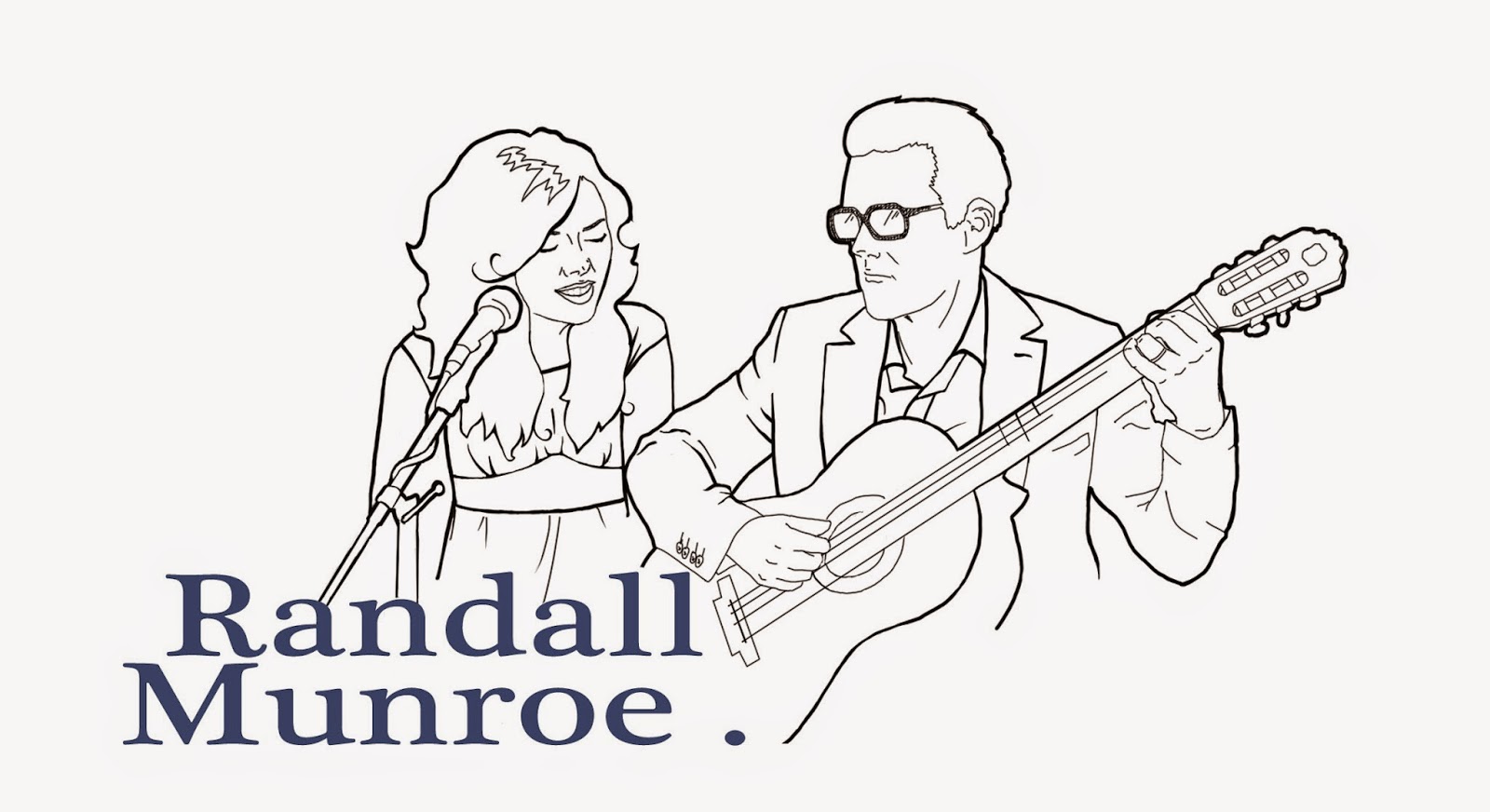